Can you spot the fungi in this picture? 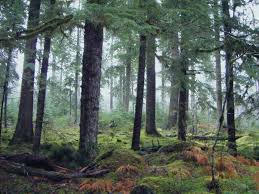 You probably can’t. It was a trick question. In fact its underground.  Did you know that the world’s largest living organism is a fungus…? It lives beneath the forest floor in Malheur National Forest in eastern Oregon. The forest service there calls it “the humongous fungus”.

Scientists call this fungus – Armillaria ostoyae – although it is commonly known as the “shoe-string” fungus. This grows throughout North Americas forests. But there are several of these large organisms in the Malheur forest, including the humongous one. This is a parasitic fungus that kills and decays the root systems of various conifers, resulting in what forest managers call Armillaria root disease. The really amazing fact is how much of this is underground. Almost the entire fungus is spread out just beneath the forest floor. It is part of the unbelievable amount of micro organisms that live in our soil under our feet. The only visible part of Armillaria is some small honey mushrooms that appear in the fall for a short time.

Not only is it humongous but scientists also believe the fungi in Oregon to be at least 2000 – 8600 years old and they are estimated to weigh as much as 35,000 tons! Sounds like a creature for a new horror movie!  “Feed me Seymour!”

This fungus can be quite devastating as it slowly spreads underground through a forest infecting and “eating” more trees. While this parasitic fungi does attack healthy trees over many years, there are more beneficial fungi that actually create healthier growing conditions for trees.

Soil is abundant in many different kinds of fungi. There are all kinds of mysterious microorganisms that live and work beneath the soils surface.  There are so many that scientists don’t even have names for all of them. These microorganisms are there for a reason. They live their lives with one goal only – to build healthy soil. And you thought there were just worms under there right…? Microorganisms in soil are important because they affect the structure and fertility of different soils. There are many classifications for the millions of soil microorganisms. Bacteria, fungi, algae, and protozoa are some of the main ones. They all biochemically processes nutrients to improve the soil they inhabit.

Fungi are important in the soil as they can be a food sources for other, larger organisms, creating a beneficial symbiotic relationship with the trees, ferns and groundcovers around them.  The quality as well as quantity of organic matter in the soil has a direct correlation to the growth of fungi.

Healthy soil = Healthy plants. A good garden has billions of microscopic helpers keeping the soil nutrient rich and guarding against pests and diseases. There are good bacteria and good fungi that are present in your soils that are in an ongoing, some could say an everlasting relationship with the plant life growing there.

We can help our soil by adding compost, mushroom manure or natural organic fertilizers. But we can also harm our soil with poor gardening practices and lack of care. The natural Eco-system is there underground. We need to respect and work with Mother Nature. We need to garden mindfully, with care and attention to what we are adding or taking away from our soils.

Now, the hope is obviously not to create a ‘humongous fungus’ in our back yards that will eat our trees…but some good fungi and bacteria in our soils is okay. You know what they say, “a little fungi goes a long way”…or, sometimes they say “If I had a fungi for every time I heard that”.…That’s fungi. Okay, I’ll stop now.