Monty and the Ephemeral Garden

Recently, my mother recommended that I try watching a gardening show that she was enjoying. It was all about French gardens – British host, Monty Don, traveled around looking at gardens and discussing the historical context of these gardens and how they related to garden design through the ages. Monty Don is a very famous British gardening guru – he has hosted a gardening show on the bbc for a number of years, been on the radio, and written books and articles on gardening for various publications. He has quite a following in the UK. Monty is closer in age to my parents but I thought I would tune in and give ‘Monty Dons’ French Gardens’ a try. (He also has a series called Monty Dons Italian Gardens).

I was pleasantly surprised – his passion for gardens and the excitement he shares on his show have a youthful exuberance. He is an excellent presenter. He obviously loves gardening, has a great deal of knowledge about the history of gardening and garden design and his passion is quite contagious. Monty has stories of Queens, jealousies and competitions between Kings about some of the gardens he visits.

He travels through France, stopping at beautiful gardens along the way. I feel that one of his great gifts is his ability to appreciate every garden, no matter if it is not quite to his taste. So many garden critics tend to be so negative about this garden or that garden style. They spend all their time cutting down others. Monty was always so positive and appreciative.

He has a real passion for hedges!  One tv critic wrote in a review of the show. “There are few things in life finer than a good hedge,” says Monty Don, standing by a very high one that seems to go on forever, horizontally as well. To be honest, I can think of a few things finer (in fact about 10 billion), but he does seem to mean it. Monty’s enthusiasm is not put on for the camera, I think – it’s real. He really does love his hedges.    Yes , he really does! 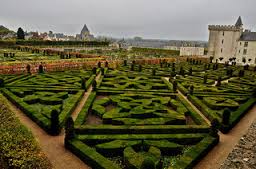 Monty had worked in the south of France as a young man, so he revisits some areas that he hadn’t been to for years. It was interesting to watch him enjoy the same French countryside with an older perspective. On one of the episodes Monty was posing a slightly pretentious question. Can a garden be art? Or is it just a garden first and art later or only just a garden. He visits 3 very different gardens and asks each garden designer to answer, which I found very insightful.

Monty Don also has a great gift in articulating his feelings. He talks about how gardens force you to be in the moment. He describes how all the natural elements come together to bring you present in that precise moment. How the smell of lavender, the sun shining through the trees and the wind blowing can create this moment where everything else drops away and one will be fully present and experience it. Then the wind shifts, the sun changes and its gone. That moment can never be recreated. It happened, you experience it and just like that its gone.

Monty Don has written of his struggle with depression since the age of 25 and his diagnosis with Seasonal Affective Disorder. He describes in his memoir “great spans of muddy time” in which there is nothing but depression. He has said that “‘Earth heals me better than any medicine”.  Monty Don has always been candid about his garden’s role in helping him with his depression. In his book ‘The Jewel Garden’, he elaborates on this much more. Monty also suffered a minor stroke in 2008 which lead to him having to step away from the cameras and his gardening show to recover. His spent his time getting better by working on his own organic garden at his home. He has also done a gardening show where he worked with recovering drug addicts to build a garden as part of their recovery process.

Here is a quote from Monty that shows his love and passion for the garden :

“The routine of a garden is a huge part of its attraction. Sarah (his wife) says that I am like an old dog plodding round the same beat morning and night, but for me the walk is measured with constant change. Following May Day – surely the most exciting date in anyone’s calendar – those changes are exploding with every step. This year has had spring more tightly coiled inside it than any other I can remember. Now, at last, it is like a struck match, flaring with a million green flames at every sweep of the eye. Tulips blossom and the last of the winter flowers and first of the summer pitch in with colour, but this is undeniably the high green day of spring.”

Heading out into the garden can be a real, positive distraction from the stresses of life. It also has the power to heal – physically, mentally and spiritually. Take the time to be in the moment, outside in a garden, no matter how big or small. Lose yourself in the plants and the trees, it will be worth it. 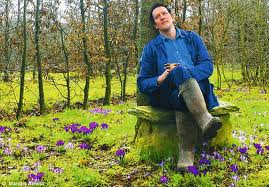